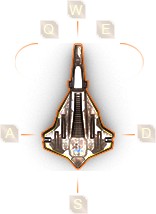 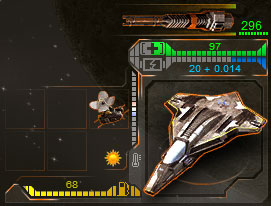 Green light refers to its condition while
Blue is assosiated with the amount of energy and
Yellow fueling quantity indicator.

Vertical display shows the temperature in the cabin, if it gets too high or too low, the pilot may die. Icon of the sun means that the ship is heated by direct sunlight. This can be avoided if you take refuge in the shade of a large object. Above the board there is a list of weapons, with the amount of charge in front of a selected weapon, at the bottom, the icons of installed modules is seen.

In the control menu, under number [0], you can select the important points of the current mission. The selected point is highlighted in yellow and near distance to it is displayed. Next to the sight the indicator of the direction to the selected point appears.

Deal with motion trajectory. When the ship passes near them, the points change their colour, marking the made course. At a distance from the point of its color gradually fades. 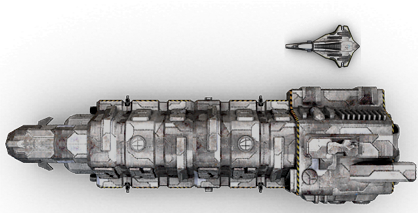 There are some essential rules where smaller spacecrafts ought to give way to a bigger one. 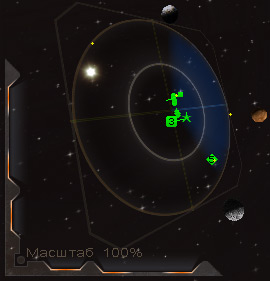 Ships, facilities and resource asteroids visible to your sensors are displayed on the minimap. The scale corresponds to the distance of your minimap sensors where the blue area is the direction of your gaze. Along the edges of the plane are located visible in the starry sky landmarks, such as the sun and planets. If the object has gone beyond your sensor, but is still visible to you, he will remain on the border of the plane.

Allied forces (green), always visible to you, regardless of distance and position. Unlike the neutral (white) or enemy (red). Ship Classes are marked with various icons. Icons can contain numbers corresponding to the commands in the control menu.

Backlight on the screen

Your ship is always in the center of the mini-map what helps to determine the position of troops around you. The troops are within your eyeshot will be further highlighted, indicating the rank for allied forces.

Using the numbers on the keyboard, you can control your troops. Yellow line highlightes currently available team. The number, next to the line, is the corresponding key on the keyboard. You can also choose the allied troops by setting the sight on them and pressing [Space]. [Tab] key brings you back to the initial menu. 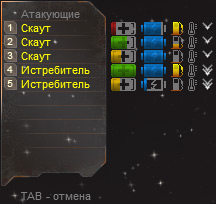 Some menus are in a list form of attacking and defending units, as well as navigation points. Total list may keep no more than 10 positions.

For units’ lists there is an item indicating the integrity of the body, energy, fuel, temperature and grade unit which is seen next to each item.

As a rule, the ships are equipped with one of the two sensor systems, simplifying navigation and warfare. 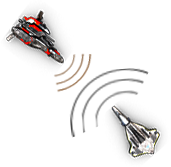 This type of sensors detects reflected from the objects its own signal or of another radar. Detection range depends on the radar power and object reflectance. For example, if the radar’s power is about 1000, and object factor is 0.5, so, it will be detected at a distance of 500m. But if the object also has a radar, it will be "seen" from a distance of 1000m. Therefore, the presence of the radar is unmasking factor. Radar can be put in passive mode by pressing [R], where it will pick up only the signals of other radars. Current radar mode is marked with an icon next to the crosshair.

Illuminated object with radar is also marked with the corresponding icon.

Allow to spot the objects based on their temperature. The key point here is the resolution of the thermovision camera, such as 500. Having the weight of the object about 5 tons, and the temperature is about 50 C. Multiplying the data, we get number 250 which is less than the resolution of the thermovision camera. So this ship is not visible.
One of the advantages the device is that it "sees" the object at any distance.
Engines and internal crafts’ systems are continuously heating it, and the massive ship is, the most visible it is to the camera.
On the screen the object is marked with a special icon.

Thermals are more complex and more expensive than radars, and they occur much less frequently, mainly in special units of corporations.

The sensors are not able to "see" some objects through the other. Therefore, asteroids and large ships can serve as a shelter from enemy detection. Also, the ship has some "blind" areas, due to their shape which are not translucent because of their sensors. And the larger the ship is, the more his "blind" zone is.

Classic weapon uses chemical energy to create shots. Initially it was planned to use the weapons purely for peaceful purposes - to protect ships from large debris or fragmentation of resource asteroids into smaller pieces.

Each has developed its own kinds of guns that have different firepower and rate of fire. Later they were modified for millitary use.
Guns of large ships, in addition to higher power, it also has a large pinpoint range of fire, which makes it possible to fire at enemy ships without getting into the affected area.

Hitting a moving target, particularly of a small size, is extremely difficult. Aiming system allows you to do so, concidering given direction and speed of the target. For this purpose it is necessary to set a sight to the target and press [Ctrl]. aiming system will capture the target and indicate the point where to shoot to get it. When combined the sight with the point the weapon is set strictly to the target by highlighting the sight in red.

If you were token as an aim the same way, you will hear a beep alarm and a warning icon appear next to the speed indicator.

Available resources are currently reflected in the upper right corner of the screen. There are four types of resources, different in its purpose and method of preparation. 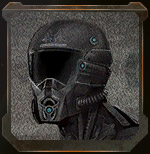 To control the ship It’s a pilot who is needed. During the construction of the new ship an available pilot from the base is moved to the built ship. With sale of the ship the pilot returnes back to the base. In some time, the pilot increases the skill that affects its flight and fighting qualities. You can recruit pilots stuff on space stations, demaged ships or completing quests.

Required for construction of ships. It’s mined by "collectors" on some asteroids and delivered to the base for processing.

Fuel is produced by the base. It refuels ships under construction and repair. When moving the bas, it itself consumes fuel what influences on amounts of its production.

Needed formaking researches. The greater the knowledge base is, the faster and more complex investigations can be carried out. Each completed study increases the knowledge database.